At Star War Celebration in Orlando Florida we finally got our first look at the upcoming Episode VII. At the end of the panel for The Last Jedi director Rian Johnson unveiled the first Teaser Trailer.

The teaser doesn’t give a lot away about the plot of The Last Jedi, which is hardly surprising given how hard Lucas Film and Disney have tried to keep details about this newest trilogy from coming out before. The majority of what we are shown in the film comes from Rey’s training with Luke Skywalker. Daisy Ridley teased that this was going to be key to the film saying, “Rey has a certain expectation on what she wants from Luke. She might not get what she wants”. The one particular image from this that stands out is this beautiful shot of Rey lightsaber training on the side of the mountain, which is pictured below. But this does hint that things won’t all be going Rey’s way in this film, and that may help shake some of the criticisms of her as a Mary Sue.

Most of the voice over in the teaser appears to comes from Luke and Rey during her training on the island. The big line is obviously the final one, seemingly delivered by Luke, “I only know one truth, it’s time for the Jedi to end”. It’s a great line to close the trailer, and is sure to get people talking. One of the big theories surrounding it is that Luke feels that the idea of The Jedi is fundamentally flawed, and so wants to reinvent what the Light side of the Force is. 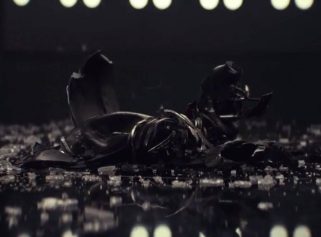 After the heavy focus on Rey’s training in the first half of the trailer the latter part gives us a lot of shots from the rest of the film. Some of these look beautifully shot by cinematographer Steve Yedlin. The shot of Vader’s helmet smashed on the floor could lead to a lot of speculation around Kylo Ren and the conflict within him. The below shot of a new type of ship or landspeeder trailing red smoke is fantastic, and the one from behind suggests that they are going up against an army of Walkers, possibly AT-STs. There isn’t a lot given away in any of these. Instead the big takeaway for me is a lot of the cinematography work.

It’s a nice tease for the film, but it is only a tease. It may disappoint a few people who were hoping for a huge trailer, but as a first teaser it’s effective, and is sure to offer people plenty to speculate on until we get our first proper trailer.